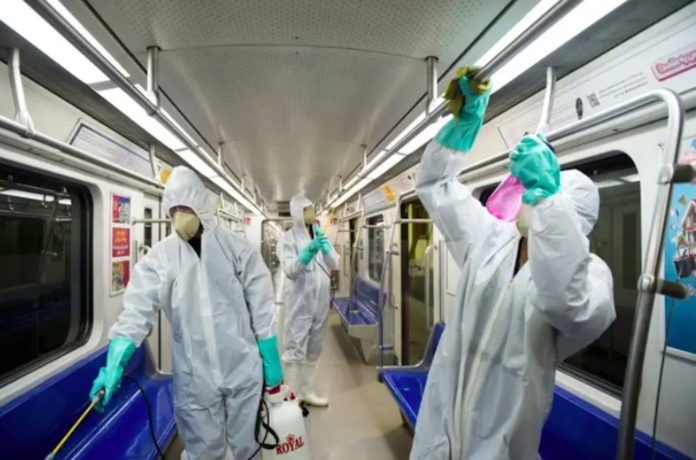 Federal health officials on Tuesday warned schools and businesses to prepare for a nationwide spread of the novel coronavirus that has killed more than 2,700 people worldwide.

“You should ask your children’s schools about their plans for school dismissals or school closures. Ask about plans for tells school,” Nancy Messonnier, a CDC director, said during a press briefing on Tuesday. “I contacted my local school superintendent this morning with exactly those questions.”

As of Tuesday, there are more than 80,000 confirmed cases worldwide of the COVID-19 illness — marked by fever, coughing, difficulty breathing, and pneumonia — with the great majority in China. However, outbreaks in Iran, Italy, and South Korea in the last week have sparked concerns about a global pandemic of the respiratory virus, for which there is no native immunity and no current vaccine.

The disease so far has presented the greatest risk to elderly people, with a 7% mortality rate in those age 65 and older, according to data from China’s public health ministry. Only 1% of the illnesses in China have been in kids under 10 years old.

Fears of a global pandemic triggered a stock market drop, tweets from President Donald Trump, and a White House request for $2.5 billion in emergency response funds from Congress, described as “long overdue and completely inadequate” by House Speaker Nancy Pelosi of California.

As of Tuesday, there are 14 confirmed cases of people in the US with the virus, as well as 43 cases of people repatriated to the US from the Chinese province of Hubei and the Diamond Princess cruise ship, Messonnier said.

The CDC indicated that the national response to a widespread coronavirus outbreak would follow a 2017 plan for a similarly novel flu pandemic, triggering school and business closures, travel restrictions on outbreak regions, and quarantines of infected patients.

Beyond the CDC, 12 states and localities in the US currently have the capability to test for the virus. After the CDC recently sent faulty testing kits nationwide, it is now working to fix the problem. Messonnier declined to say when the updated kits will be ready.

At a World Health Organization press conference also on Tuesday, Bruce Aylward, who led the COVID-19 international experts mission to China, presented results from the team’s inspection of the country’s response to the outbreak. “It’s the unanimous assessment of the team that they have changed the course of this outbreak,” Aylward said, citing the decline in new cases in China. Aylward argued that China’s aggressive response to containing the coronavirus led to “hundreds of thousands” of people in the country avoiding getting sick.

However, China’s containment of the virus has not kept the illness from spreading to 35 countries. Most seriously, the specter of an uncontrolled spread in Iran arose over the weekend, with at least 95 cases reported there and 16 deaths. On Tuesday, the head of Iran’s anti-coronavirus task force tested positive for the virus, a day after appearing visibly sick during a news conference.

Some epidemiologists, including David Fisman of the University of Toronto, have suggested that a great many more cases may be in Iran, based on cases spreading across the Middle East to Kuwait, Bahrain, Oman, Afghanistan, Iraq, and Lebanon.

“To date, our containment strategies have been largely successful — as a result, we have very few cases in the United States and no spread in the community,” Messonnier said. “But as more and more countries experience community spread, successful containment at our borders becomes harder and harder.”

Also see the article: How to Prepare for Coronavirus in the U.S.